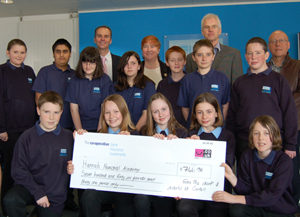 Every year, Cantell Maths and Computing College in Southampton has a Book Week, with various activities, including the pupils dressing up as characters from their favourite books. Organised by the school librarian, Melita Sheppard, Book Week is always a good fundraiser, but this year, supported by the Southampton branch of Borders bookshops, was exceptional.

We were naturally delighted to learn that the proceeds would be donated to the Hannah Memorial Academy.

On March 20th Roger and John visited the school (which Hannah attended) to receive a cheque, and here we are pictured with Melita, Mark Bagust (Deputy Head), and Pupils from the school. We would like to thank everyone involved, including Ken Robinson who took the photo. We hope that the relationship between the two schools will continue for a long time to come.