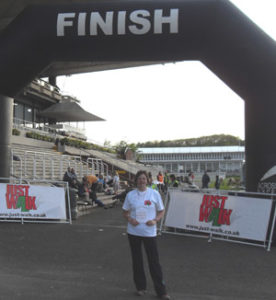 Janet Stanton is the Finance Officer at Barton Peveril College, and we were impressed to learn that in May she completed a massive 60km circular walk from Goodwood racecourse taking in the beautiful South Downs Way before returning to Goodwood.

After a punishing training schedule, she had hoped to complete the walk in around 11 ½ hours and actually managed to finish in 10 hours 45 mins! The only injury she sustained was a blood blister on her little toe (which she tells us felt much better after she had popped it!)

She chose to raise money for the Hannah Memorial Academy as we are the main college charity this year.

She has raised £137.50 through her online sponsor page and expects to raise a further £125 from donations which will easily exceed her £250 target. Looking at the photo of Janet at the finish line, you wouldn’t think that she’d covered 60km. She looks ready for another 60!

Congratulations Janet, on beating both your targets, both the time it took and the amount you raised. And thank you for supporting the academy.